Encouraging Your Young Readers - Live from The National Book Fair 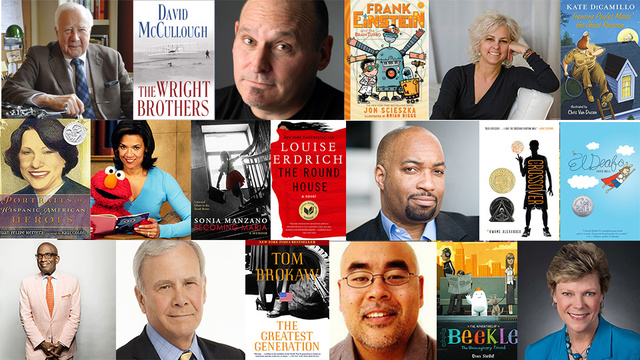 As dozens of bestselling authors and thousands of book fans converge on Washington, DC this Labor Day weekend for the 15th Annual Library of Congress National Book Festival, PBS Book View Now will be there to provide audiences nationwide with comprehensive coverage of the all-day literary event. Coverage will be produced by Detroit Public Television (DPTV) and is made possible thanks to the support of the Wyncote Foundation. The coverage will be hosted by Jeffrey Brown, Senior Correspondent and Chief Arts Correspondent for PBS NewsHour, and Book View Now host Rich Fahle.

The National Book Festival will be held Saturday, September 5th at the Walter E. Washington Convention Center in DC. Live stream coverage of the event will air from 12 noon until 6 p.m. ET, with interviews tentatively scheduled with a host of authors. Of particular interest, is the inclusion of authors of works for young readers:

Jon Scieszka is one of our guest hosts — and someone who has dedicated his writing life to getting young kids excited about writing — and especially boys, a greater percentage of whom tend to drift away from reading after picture books.  Scieszka is perhaps best known for his Stinky Cheese Man book with Lane Smith, but his Trucktown series are aimed at pre-K to Kindergartners.

Scieszka was also the very first National Ambassador of Young People’s Literature, selected by the Librarian of Congress.   @ 12:30p to 1:30p

Dan Santat, The Adventures of Beekle The Imaginary Friend. Winner of this year’s Caldecott Medal. Wonderful picture book that is being made into a major motion picture directed by Jason Reitman. @4:40pm

Kate DiCamillo.  A two-time Newbery Medal winner, a favorite of teachers, librarians and kids everywhere. AND the current National Ambassador of Young People’s Literature, chosen by the Librarian of Congress.  @ 1:20pm

CeCe Bell.  CeCe has written a beautiful book, El Deafo, about being deaf and hard of hearing, charming librarians and teachers and kids everywhere.  @ 12:55pm

Astronaut Buzz Aldrin, who has written a new book for young readers about building a home for humans on Mars.   @ 12:40pm

Kwame Alexander is a poet, educator, and New York Times Bestselling author of 21 books, including THE CROSSOVER, which received: the 2015 John Newbery Medal for the Most Distinguished Contribution to American literature for Children, the Coretta Scott King Author Award Honor, The NCTE Charlotte Huck Honor, the Lee Bennett Hopkins Poetry Award, and the Passaic Poetry Prize. His other works include the award-winning children’s picture book "Acoustic Rooster and His Barnyard Band," recently optioned as a children’s television show, and the Junior Library Selection, "He Said She Said," a YA novel.